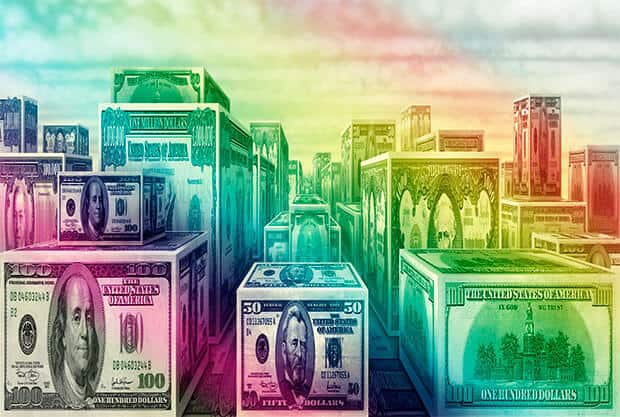 A year after gay marriage becomes legal, how are same-sex couples faring financially?

More than one comedian has made the joke – which some say is offensive to everyone, regardless of sexual orientation – that same-sex marriage means gay people can now be as miserable as straight people. Amazon even sells a T-shirt saying as much.

But a new study shows that’s not true – in love or money.

Wells Fargo recently researched this topic, and for a very greedy reason. “It’s important for us to really get to know and understand our customers,” says John Lake, whose title at Wells Fargo is “LGBT Segment leader.”

The good news for Wells Fargo: “More than half surveyed (67 percent) say marriage made their relationship better, and 62 percent believe it will improve their financial future.”

If nothing else, same-sex spouses will benefit just like their opposite-sex peers. They’ll combine their bank accounts. Then use the better credit score of the two to land a good mortgage rate. This generally will save on expenses because they’re now a team.

In fact, they may do even better financially. Even though 1 in 5 wants children, most of those (76 percent) “say they will wait to have children until they are financially prepared to do so.”

Though most are excited about their financial future, 31 percent admit that sharing money with a spouse is honestly, scary. … Same-sex couples also expressed a need to learn more about healthcare decision-making rights (54 percent), insurance and healthcare coverage (53 percent) and/or filing joint taxes (54 percent).

“The concerns facing same-sex couples related to merging finances is not at all uncommon,” Lake says. “LGBT Americans recognize that access to marriage provides certain financial benefits and obligations, still, there is some anxiety around specific issues. This signals a real need, and desire, for more education.”

Thankfully, the rules for smart saving and spending in a marriage are the same for all couples. I’ve always said…

It doesn’t matter what your sexual orientation is, what your race is, what your religion is, or what your height and weight are. Learning how to be financially responsible in a marriage is all about following some simple, if not always obvious, rules.

What are those rules? Debt.com has spelled them out in two special sections: Finance for Couples and Money Management for Families. Check them out.