Ringing In The New Year With Recession 2018? 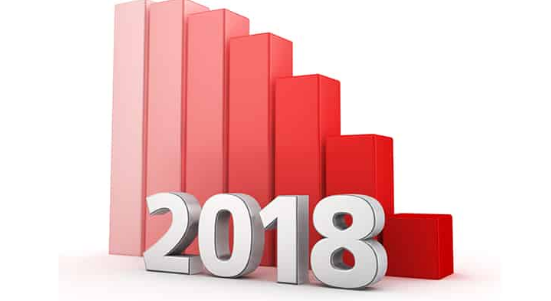 We have to survive 12 months of crushing personal debt to avoid another economic meltdown.

More than two-thirds of all New Year’s resolutions involve losing weight or saving money. Mine is different: My resolution is to be wrong about the recession in 2018.

Several times last year, I wrote specifically about the odds of a recession gripping the nation this year.

I muse about an auto bubble causing a recession in 2018, just as the housing bubble did in 2007 — “literally driven by the massive growth in auto loans to Americans who can barely afford them.”

While the economy is improving, I analyze a poll showing 65% of Americans report “losing sleep” over five financial topics: health care bills, retirement savings, mortgages or rents, student loans, and credit card debt. Right before the last recession, that number was only 56%. Even at the height of the Great Recession, it was 69%.

More bad news about auto loans. They’re at an all-time high at $1.2 trillion, and 107 million Americans are on the hook for that amount. “There is only 323 million Americans total, so almost a third are driving in vehicles they don’t own outright,” I write. “Tack on another trillion for credit card debt and more than a trillion for student loan debt, and you can see we’re moving in the wrong direction.”

I analyze a 166-page report on student loans. On page 81, I find this: “U.S. student loan balances topped $1.3 trillion in 2016 and have nearly doubled since 2009. After mortgages, student loans are the second largest category of debt held by U.S. citizens, accounting for 11% of all loans. To some, this might appear eerily reminiscent of the mortgage crisis where delinquency rates had peaked at 11.5% in 2010.”

I’ve been a CPA and financial counselor through a few recessions, and I can tell you this: Recessions resemble natural disasters. They don’t hit everyone equally. So I report on a study that predicts which states will suffer least when the next recession inevitably hits. Hint: They’re not on either coast.

Until now, most recession analysis has been limited to the business press. The Atlantic, a well-respected magazine known most for its political coverage, runs an article titled, “The U.S. Isn’t Prepared for the Next Recession.” I break it down. The most damning statistic wasn’t about any specific personal debt, but all of it: a third of Americans “could not cover three months of expenses, even if they sold assets, dipped into retirement accounts, and asked friends and family for help.”

If you click the links above, you’ll see I used the phrase “I hope I’m wrong” throughout the year.

Think of recessions like the flu. No matter how much you wash your hands and take other precautions, you’re going to get an infection at certain points in your life. You hope it’s infrequent, and you hope the symptoms don’t last long.

Of course, you get flu shots. You can save up your sick days so you can take time without worrying. Or you can eat right and exercise, so you have the strength to recuperate faster.

Likewise, you can prepare for a recession by paying off debts, creating an emergency fund, and saving for retirement. What stokes my fears about a recession this year: Americans aren’t preparing for the next financial flu. Even in a mild downturn, they’ll suffer for much longer than they should because they’re buried under so much personal debt.

Sadly, that personal debt is only increasing. Perhaps you can now understand my scary prediction — and why I want to be wrong about recession 2018.

Home » Dvorkin On Debt » Ringing In The New Year With Recession 2018?