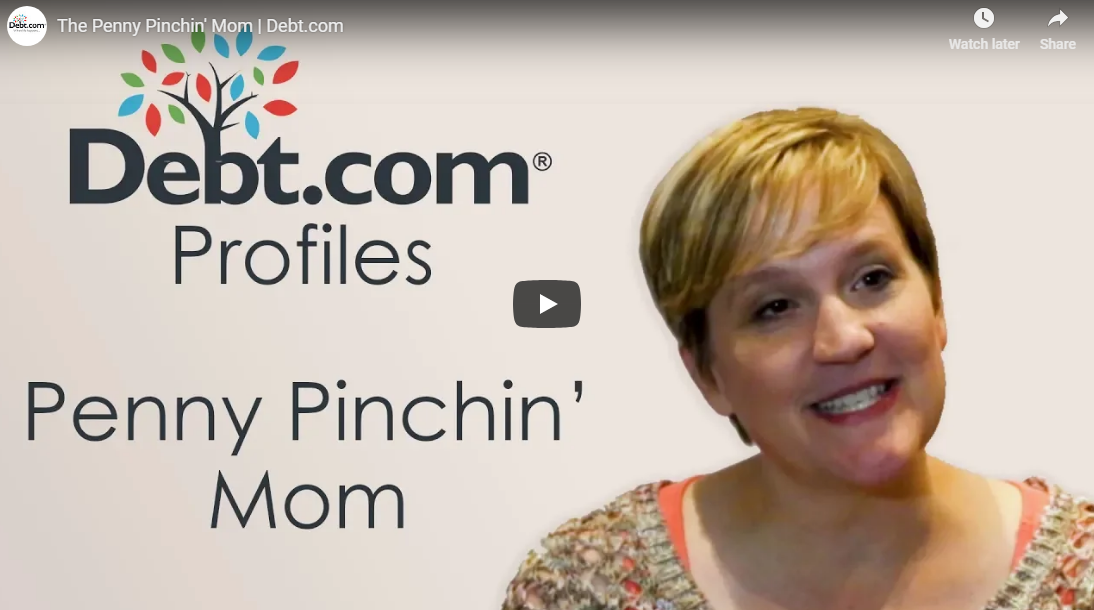 And how she created a phenomenon.

Tracie Fobes secret for getting out of debt? Pinching pennies. Seriously. I know that sounds too simple to be true, but sometimes the truth is that simple.

Listen to Fobes explain how she and her husband paid off $37,000 in debt in just 27 months…

The following transcript is for the featured video titled: “The Penny Penchin’ Mom”

I’m Tracie Fobes and my website is, PennyPinchinMom.com. Several years ago, my husband and I paid off more than $37,000 in debt. When I did that, I had people saying “well how did you do that? You know, you guys had one income and you’re a stay at home mom. How did you make that happen?” And I said, well I was finding deals at the grocery store and at the drug stores and getting stuff for my family for virtually nothing. And they’re like well can you teach me how to do what you’re doing?

I think about how you go out with your girlfriends for dinner, you’ll talk about the most personal, intimate things in the world with them. But the minute somebody says so what’s your financial portfolio look like? Everyone stops talking.

No one wants to talk about it; it’s such a taboo topic. Because we can learn so much from one another. You know what one person has gone through might be the inspiration to help somebody else. And someone might have an idea that works that’s going to inspire somebody to make that one simple change in their budget. When I first started is when the economy was basically in the toilet for lack of a better description and everybody had to save money.

Even when people are in debt and they don’t have any money, they’re still not being smart with their money. They aren’t scaling back on luxuries, like dining out with your family. So, the first thing that you have to do is make a psychological and emotional decision that you’re done. You have to be willing to give up anything and to do anything under the sun to get out of debt.

Obviously, paying off that much debt involved more than clipping coupons – but it was a big part of it

You might be wondering: Why am I talking about the eating habits of one random woman? The answer is just as simple as her debt-busting solution: Tracie Fobes is no random woman. She’s a phenomenon.

Fobes is the creator of Penny Pinchin Mom, a personal finance website she created simply to share what she learned. Now it’s the go-to advice site for families looking to save on everything from recipes to retirement. Her success still surprises her.

“When a friend said I should start a blog, I Googled, what is a blog?” she recalls with a laugh. “I had no clue what a blog was! But not even a year in, I realized, ‘There’s something here.’ It took off from there.”

Fobes is a role model to her readers, but she’s also an inspiration to me. She balances tough talk with the empathy of someone who’s been through hard times but never lost her soft side. Listen to what she told Debt.com about the major reason why Americans are so mired in debt…

I think it’s psychological. I think people don’t want to own their problems. It’s like this taboo to talk about money. Think about it. You’ll go out with your girlfriends to dinner, and you’ll talk about the most personal and intimate things in the world with them. But the minute someone says, “So what’s your financial portfolio look like?” – well, everyone stops talking

When Fobes says, “We need to not be afraid to have those conversations,” she’s quite literally putting her own money where her mouth is. She’s had this conversation publicly – about her lifelong struggle with debt that involved a bankruptcy and repeated budgeting lapses until she finally got it right.

“We can all learn so much from each other,” she insists. “What one person has gone through might be the inspiration to help someone else. And someone might have an idea that works that might inspire somebody to make that one simple change in their budget that’s going to make all the difference.”

Fobes offers one excellent example of that: “If you’re in a relationship and you’re gung-ho to get out of debt – but your partner is not – it’s never going to work.” That’s so true. Debt is just as much in your head as your wallet.