She Will Be One Electric Freshman 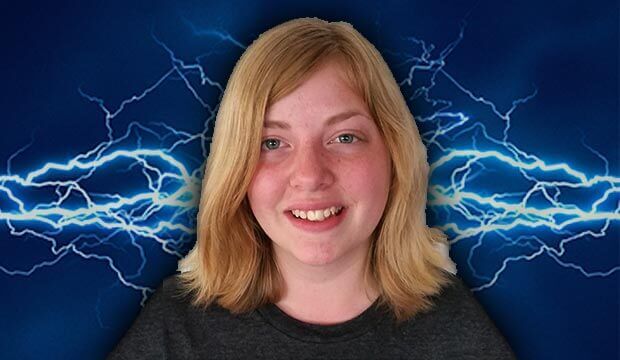 “I’ve been applying for scholarships since February,” says the home-schooled high school senior from San Antonio, Texas. Her total is close to 50 — from The National WWII Museum in New Orleans to the Coca-Cola Scholars Foundation to a Jane Austen essay contest.

How many has she won?

None. Until now. Kiva is the fourth winner of the Debt.com Scholarship for Aggressive Scholarship Applicants.

“It’s really encouraging to finally win a scholarship and know that my efforts have not been in vain,” Kiva says. “Everyone who applies loses more than they win. But you keep going.”

Doesn’t she get discouraged?

“Of course I get discouraged,” she admits. “I mean, who likes getting rejected — over and over and over again! The fact of the matter is, you can’t expect to win the first scholarship you apply for, although that would be awesome. I have to realize that I am one of hundreds or thousands of applicants.”

“There are so many deserving people out there, and sometimes someone else’s application or essay is just better than mine. That being said, I cannot let myself give up. If I keep applying, then I have a chance at winning. If I stop applying, I don’t,” she adds. Kiva’s goal is to raise enough money to study electrical engineering at Texas A&M.

Where she wants to end up

“I’m very interested in learning more about energy systems and electricity,” she says. “I’d love to have a job where I can help design and develop new energy technology and power systems. I think it would be cool to design more efficient ways of generating and distributing electricity. One example would be researching and developing solar panels that have a higher storage capacity.”

However, she not only wants to be efficient generating power, she wants to be equally efficient spending money. She’s going to start her college career in community college.

“Community college is way less expensive, and colleges actually like transfer students, because they have already proven they are successful in college,” says Kiva, sounding far wiser than her 17 years. “In the end, it doesn’t matter where you spend your first two years, you’ll still get your degree from whatever Big Name University you transfer to — and you’ll save a boatload of money.”

That attitude, as well as her actions, is why Kiva became a Debt.com scholarship winner on her second try. If you want to take her advice and “apply, apply, apply,” the next round of our scholarship opens today. Learn more and give it a shot.

Home » Dvorkin On Debt » She Will Be One Electric Freshman