Ally And Matt Owen Are Setting The World On FIRE 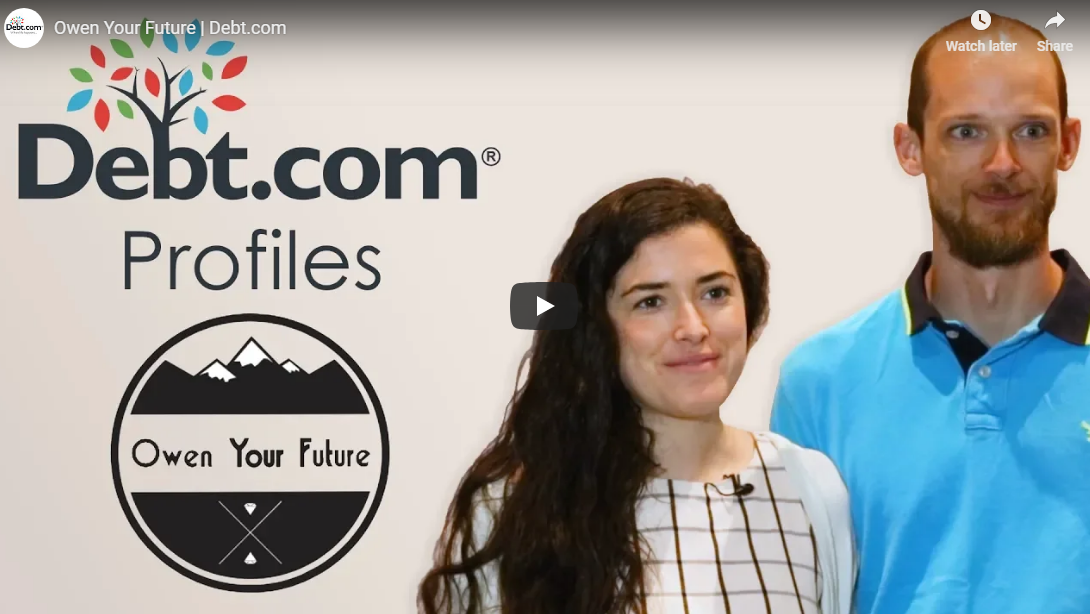 Here's what you can learn from a traveling couple with no debt.

The married couple crisscross the country in a van, helping Americans climb out of debt the old-fashioned way: by cutting expenses. They have the street cred to dole out this advice, because they did it themselves. Now they offer online courses and personal coaching at their website, Owen Your Future.

Listen to this one-minute explanation of their lives that they recently told Debt.com…

The following transcript is for the featured video titled: “Owen Your Future”

Ally Owen: I am Ally Owen,

Matt Owen: We blog about personal finance, minimalism, and travel.

Matt Owen: We found so much freedom in that, that we want to share that with other people. Share our story because it’s kind of interesting and different, and a lot of people pursue FIRE. And we hope to inspire people to do something with their life.

Ally Owen: I don’t think there is any persuading we could do. We can just show our lifestyle. Show how we found fulfillment and happiness through a minimalist lifestyle. So much of keeping up with Joneses, like doing what everyone else is telling you to do and what you think you’re supposed to do. But when you’re free from that, then you get to decide who you want to be.

Inspiring, isn’t it? I must admit, however, I couldn’t do this…

“We self-converted a van into a camper and travel the country,” Matt says.

Adds Ally: “The worst thing is that we’re always in each other’s way, So when he’s in the kitchen and I’m trying to get by, it’s a dance.”

Then again, Matt and Ally are younger than me. When I was starting my first business to help Americans get out of debt, I was also a minimalist. Just in a different way. Instead of renting an office, I rented a closet in an old office building and converted it into my office. I could fit one dilapidated desk and one dented file cabinet in there.

In that sense, Ally and Matt are doing what many successful entrepreneurs do: They’re willingly sacrificing now to be successful later. Except in their case, they’re doing it joyfully, and they’re already successful.

“Always having your home with you is amazing,” Matt says. “It’s been truly transformational in our lives. We’re helping millennial couples — in particular, relate to each other better about money as well as complete a plan about their financial goals. Whatever that means to them, whether it’s travel, retirement, or changing careers.”

Ally says the biggest challenge in their financial coaching isn’t financial at all. It’s inspirational.

“I don’t think there’s any persuading we can do,” she says. “We can just show our lifestyle and how we have found fulfillment and happiness through a minimalist lifestyle and inspire others to do the same through our example.”

Ally and Matt are major proponents of FIRE, which stands for Financial Independence Retire Early. That’s the hot new term for a fairly old concept: Save now so you can spend later. Each generation needs their own terms for these concepts, however, so it can motivate them to embrace them.

“When you talk to someone about FIRE, they’re either ready to hear it or they’re not,” Matt says. “It either sparks something in them and a light bulb goes off, or there’s a barrier up.”

I’m curious to see where Ally and Matt are in a decade. Will they still be on the road? I imagine they’ll want to settle down someday. They may splurge on a fancy dinner every so often. They might even buy something they don’t really need. It won’t be often, and it won’t be, as they say, “to keep up with the Joneses.” It also won’t drive them into debt. They’ve driven around the country proving that.